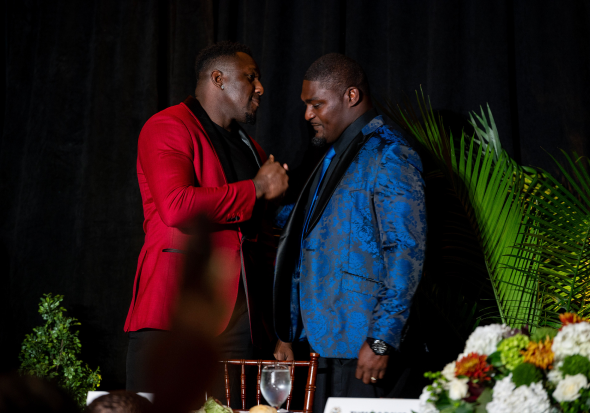 The City of Jacksonville Division of Sports and Entertainment created the Georgia-Florida Hall of Fame to acknowledge the many great records, performances, career highlights and outstanding memories that have made the Georgia-Florida game one of college football’s best traditions. 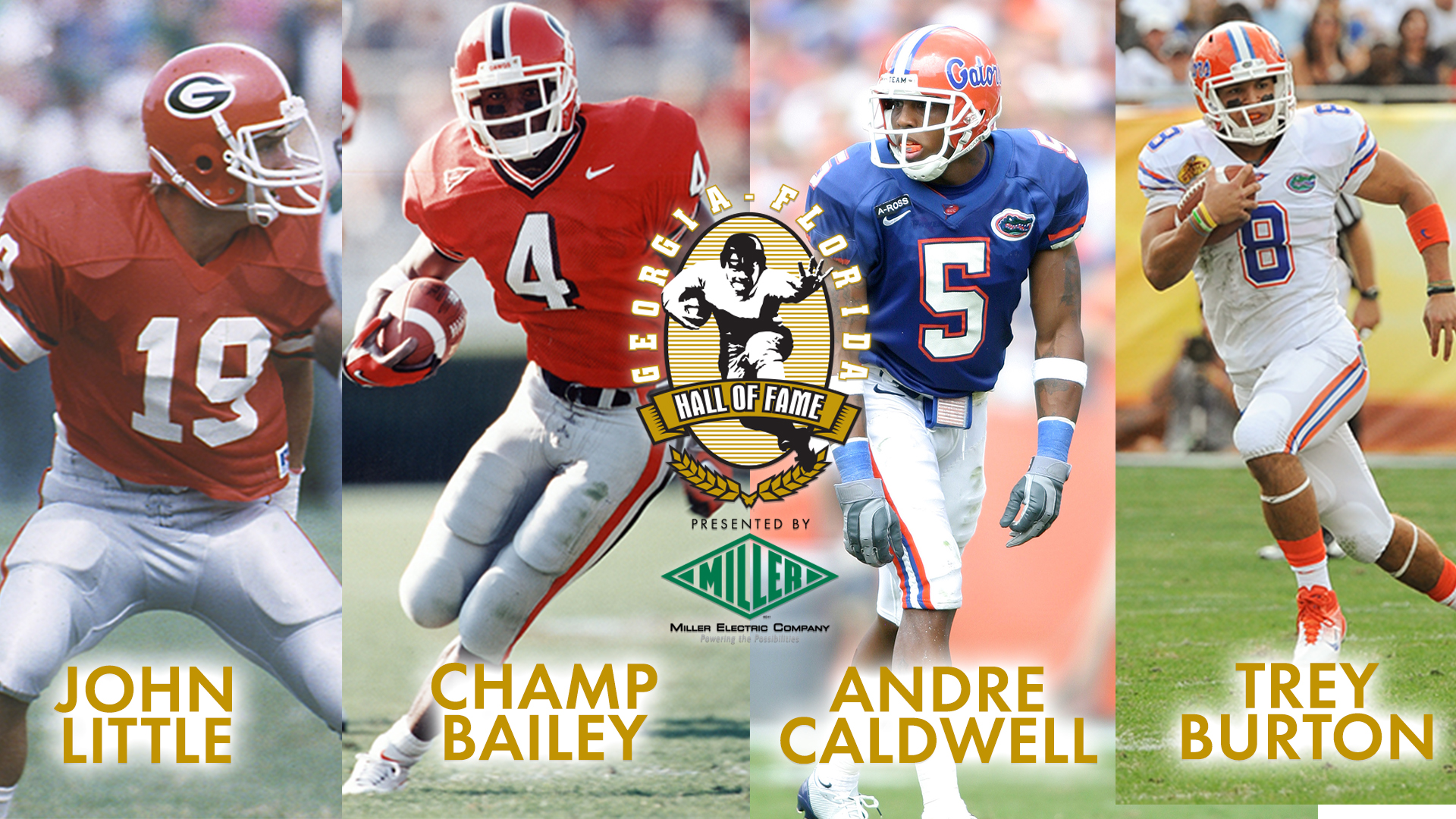 Champ Bailey earned a reputation as one of the best multiple threats in college football during his career at Georgia. He was considered the most versatile player at UGA since the era of two-platoon football. Bailey was a consensus All-American playing offense, defense, and special teams. He played more than 1,000 plays during his junior season in 1998 including more than 100 plays in seven different games. Bailey finished the season with 52 tackles, three interceptions, 744 receiving yards, five touchdowns, 261 kickoff returns and 49 punt return yards. The All-Southeastern Conference selection was named winner of the 1998 Bronko Nagurski Award as the nation’s top defensive player and was a consensus All-American selection.

Bailey was drafted by the Washington Redskins in the first round of the 1999 NFL draft and was a 12-time Pro Bowl selection from 2000-2013 as a member of the Redskins and the Denver Broncos. He retired in 2014. He was named a member of the Football Writers Association of America 75th Anniversary All-America first team in 2015.  In 2018 he was inducted into the State of Georgia Sports Hall of Fame. In 2019, he was elected to the Pro Football Hall of Fame in his first year on the ballot and in 2022 he was selected for induction into the College Football Hall of Fame. In 2019 he was named one of college football’s 150 greatest players in the ESPN film documentary “Football is Us: The College Player.” 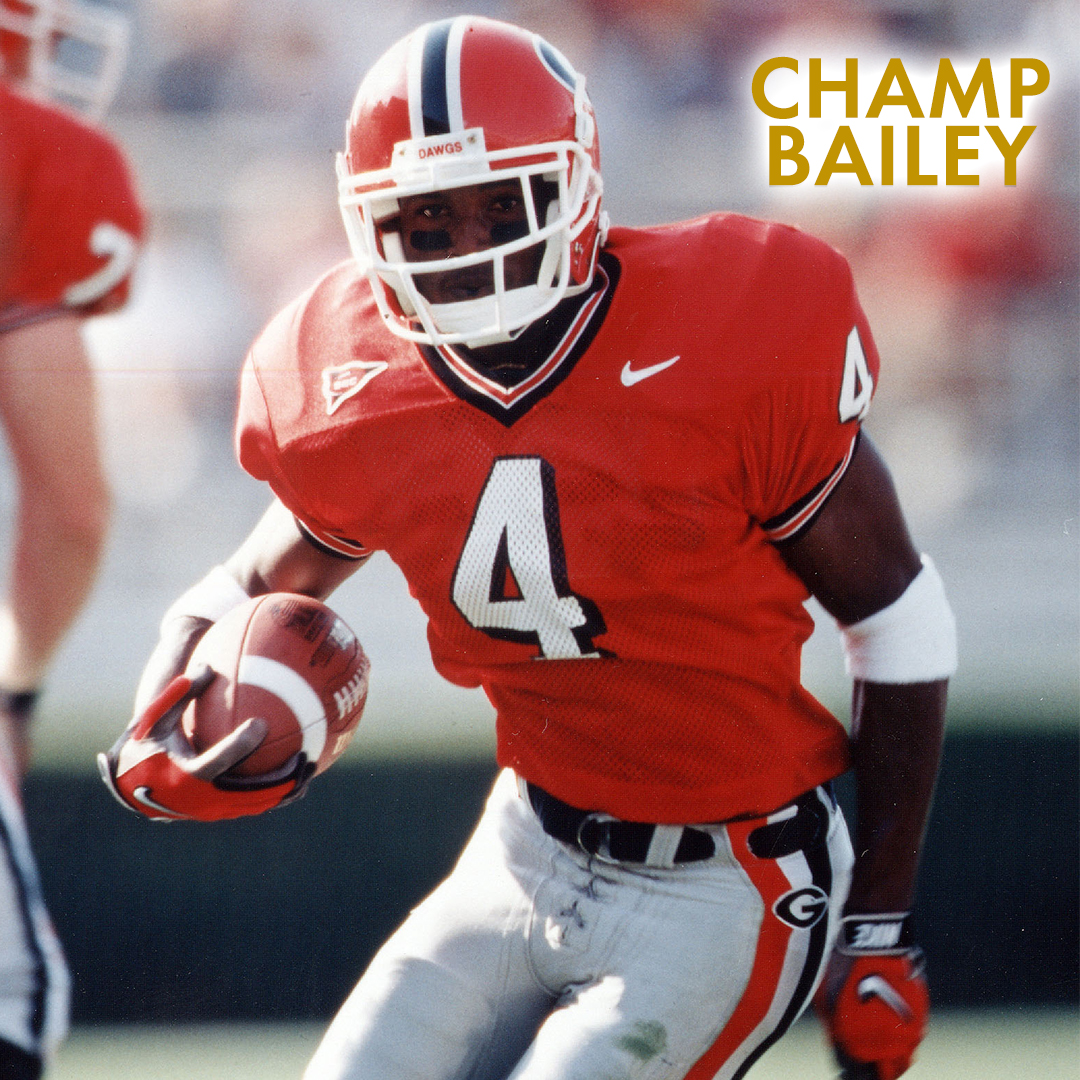 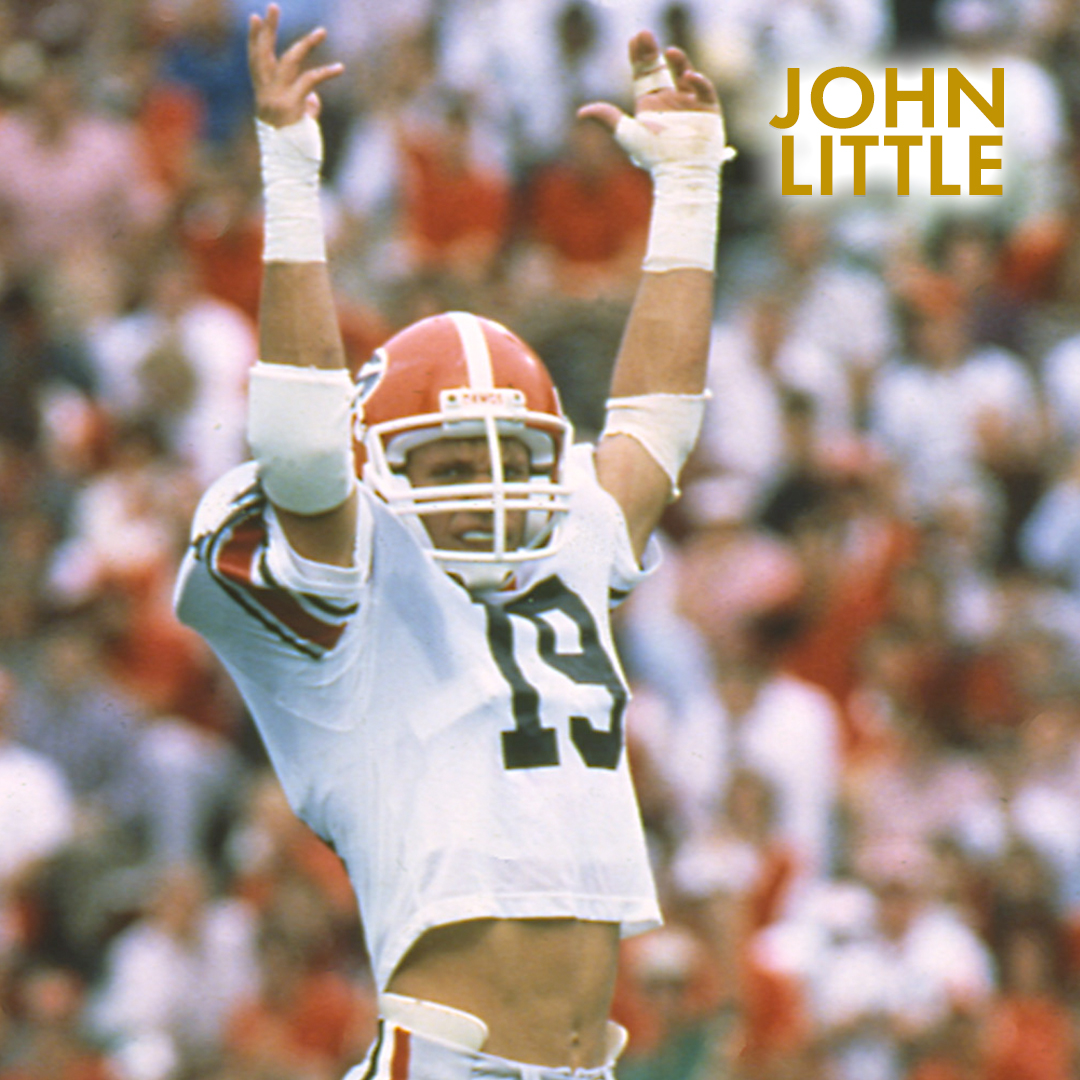 John Little had the fortune/misfortune of following two-time All-American Terry Hoage as the Georgia Roverback in 1984.  However, he made the most of his opportunity earning a starting role for three straight years (1984-86). During his career he was named consensus All-SEC in 1985 and ’86 and also named a first team All-America both years as well.  His 381 career tackles is the best in school history for a defensive back and still ranks 7th best in school history for a player at any position.
He was one of 20 players throughout the country chosen by the College Football Association to participate in a television commercial promoting college football. Little was also a two-time Academic All-SEC selection and was elected as the permanent team captain following the 1986 season.  He was selected as Georgia’s SEC “Legend” in 2014 and was inducted into the UGA Circle of Honor in 2016.

As a true freshman seeing limited playing time, Andre Caldwell had just nineteen receptions. During his sophomore season in 2004, Caldwell’s production jumped to forty-three catches and three receiving touchdowns, as well as two rushes for sixty-six yards and one score. As a senior team captain in 2007, Caldwell recorded a career-high 761 yards and seven touchdowns on fifty-six receptions, had twelve carries for fifty-eight rushing yards and a touchdown, and was the recipient of the Gators’ Fergie Ferguson Award as the “senior football player who displays outstanding leadership, character and courage.”
Caldwell went on to play in the NFL as a wide receiver and kickoff returner for the Cincinnati Bengals and Denver Broncos. He assisted the Broncos to a Super Bowl win against the Carolina Panthers in 2016. 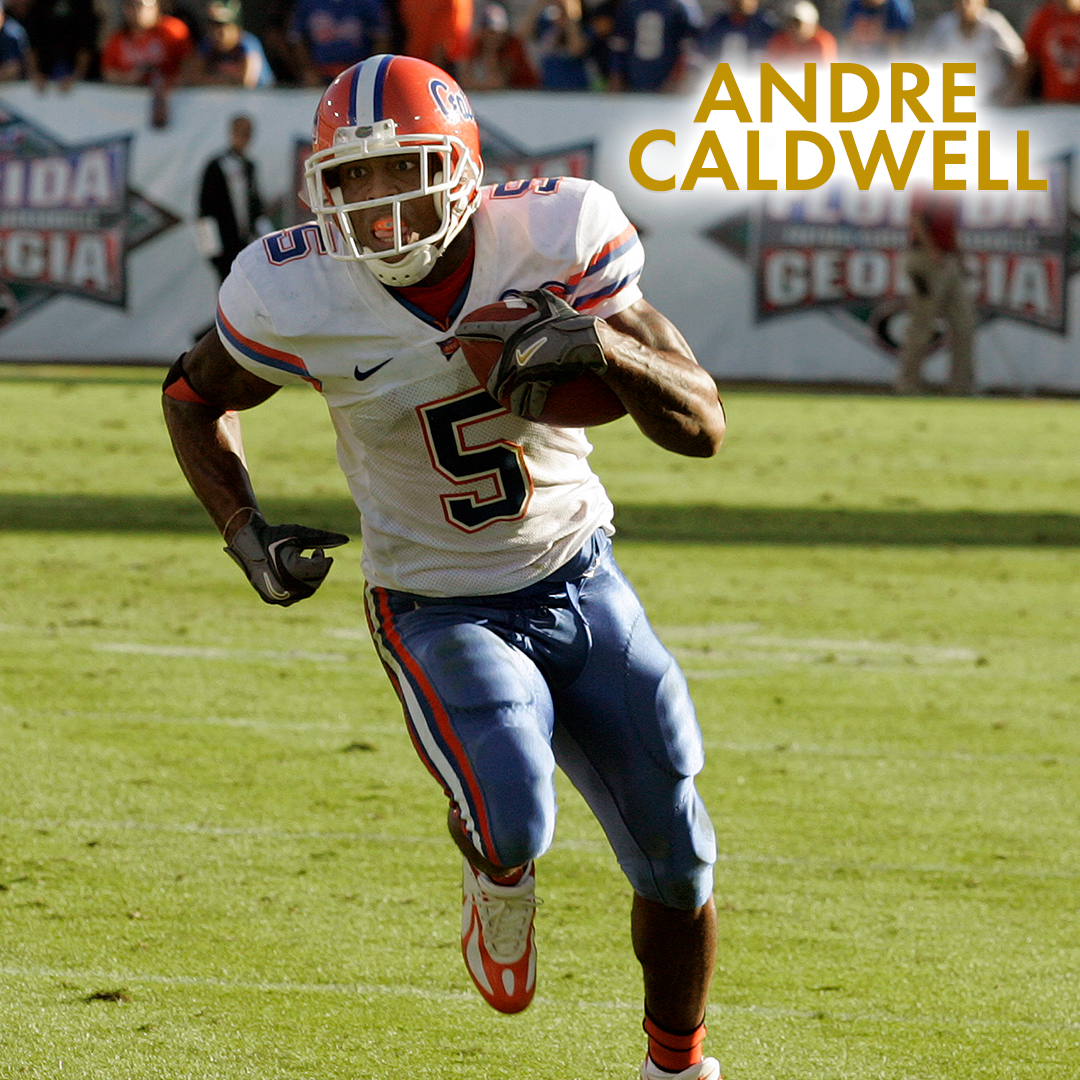 Trey Burton is a versatile player that appeared in 50 games and started 29. As a freshman in 2010, he broke Tim Tebow’s team record for touchdowns in a single game with six. In 50 career games with Florida, he had 720 rushing yards, 976 receiving yards, and 20 total touchdowns. In 2012, Burton appeared in 12 games, starting four. His 80-yard rushing touchdown against Tennessee was the eighth-longest rushing play in school history. He was also named the Gators’ Offensive Player of the Game against Tennessee and South Carolina. He was voted by teammates to serve as a team captain in 2013 as he moved to wide receiver full time after playing multiple positions his first three year. He finished his career with 720 rushing yards and 16 touchdowns on 141 carries and 107 catches for 976 yards and four touchdowns. He ranked third on the team with 38 receptions for 445 yards with one touchdown.
Burton went on to play tight end in the NFL for the Philadelphia Eagles, Chicago Bears and the Indianapolis Colts. In Super Bowl LII against the New England Patriots, Burton threw a touchdown pass on the famous Philly Special trick play to quarterback Nick Foles with 34 seconds remaining in the first half. The Eagles went on to win the Super Bowl 41–33. The Philly Special is now one of the most well-known plays in Super Bowl history.

DID YOU KNOW THE GEORGIA VS. FLORIDA HALL OF FAME IS ON DISPLAY ALL YEAR?

Stop by Vystar Veterans Memorial Arena to check out the historical display of the Georgia vs. Florida Hall of Fame inductees. 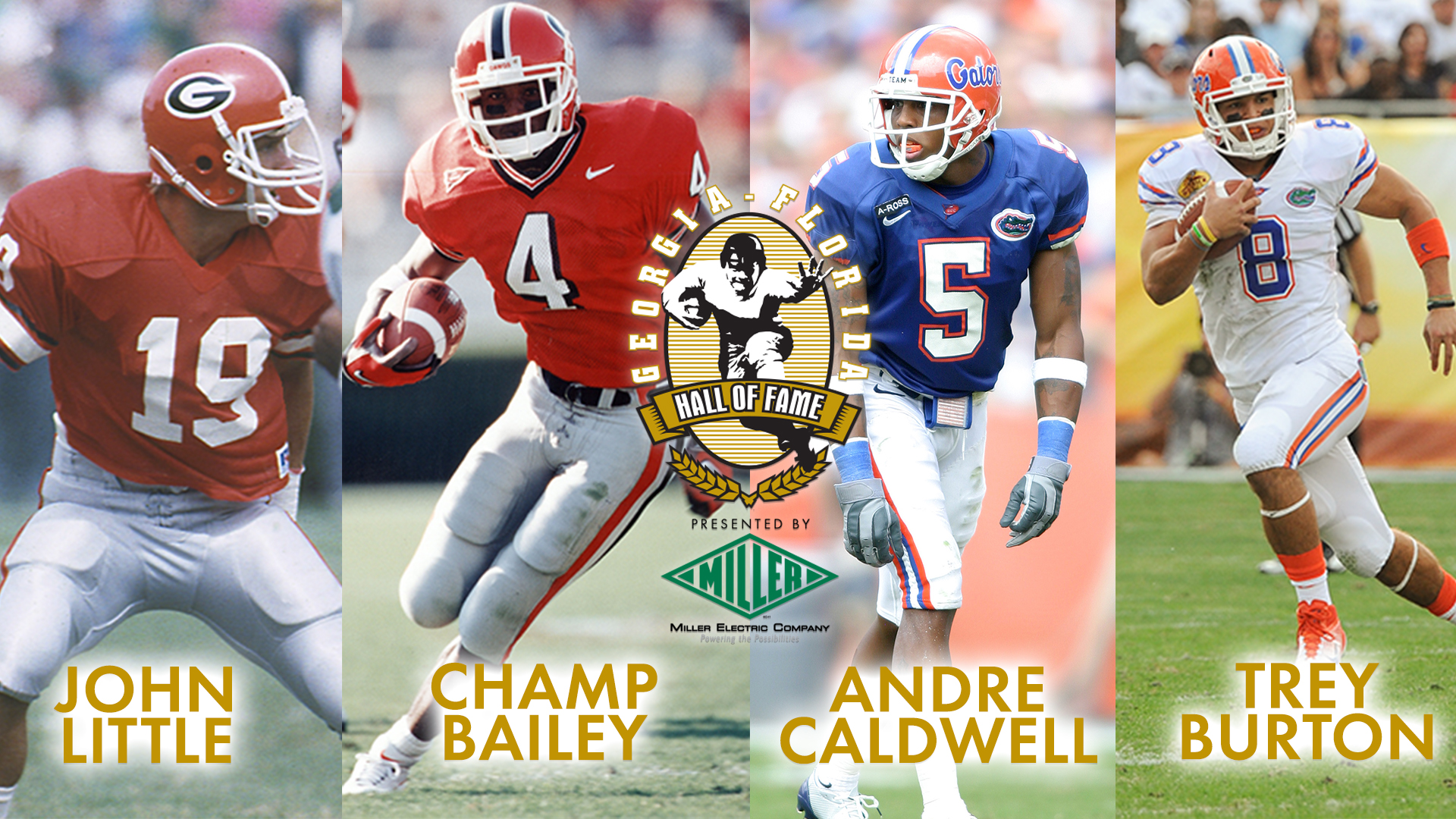